Joachim Delventhal is angry. Not long ago, he found out that his pension, JØP (Juristernes og Økonomernes Pensionskasse), invests his pension in weapons, fossil fuels, and other unethical enterprises.

“My pension is intended to secure my future, but if the investments made actually ruin the future, where is the sense in that?” asks Joachim Delventhal, PhD fellow at the Department of Organization at CBS and who’s primary research areas involves responsibility, CSR and moral blindness.

In this series of articles, we will investigate pension investments in oil, weapons and tobacco – and the future of these, based on relevant insight from a range of people. For example, you’ll meet a pension researcher from CBS and representative from Matter Pension, a company started by two CBS alumni as an alternative to pension companies with investment portfolios based on oil, weapons and tobacco.

With help from the private pension company, Matter Pension, and based on JØP’s public list of stocks from 2018, he has compiled an overview of the companies JØP invests in.

Currently, Joachim Delventhal – like every other public employee – is tied to his pension company. Due to Danish law and collective agreements, public employees are not permitted to switch pensions, although other alternatives on the market offer sustainable and responsible pension investments.

“This really provokes me, as I want to switch my pension, but this is virtually impossible for me and other public employees. Because of this, the pension companies have no incentives to change their portfolios to become more sustainable and responsible,” he says and continues:

“And it is important to note that even though we have no real influence on the choice of pension fund or their investments, we become responsible for the negative impacts of their investments because our money contributes to them.”

The war in Yemen is terrible. It is man-made. It is particularly devastating for children. And I am forced to participate in it.

Not directly of course. I live as a foreigner in Denmark and there is no obvious link between me and the war. But I work for the state and therefore I get a pension. A pension that I cannot refuse and a pension that is being invested – against my expressed will – in nearly all major weapons manufacturers in the world (JØP invests in 9/10 of the largest weapons manufacturers globally – see: https://www.joep.dk/…/2…/12/aktie-beholdning-joep-301118.pdf).

So, my pension is used to financially support the very companies that deliver the weapons that kill Yemeni children and destroy their country – robbing them of both childhood and future.

I am writing this in protest against JØP and the system that allows them to do what they want and forces their customers like me to be complicit. I tried to leave JØP for a sustainable pension, but cannot, because the rules make it virtually impossible. I asked to simply stop receiving a pension, if they would in turn stop paying money to JØP. Both was explicitly refused by Agency for Modernisation (Moderniseringsstyrelsen) . They do not cause the war in Yemen. They most likely condemn it. But they take part in facilitating it by providing finances. This is shameful.

Joachim Delventhal contacted HR at CBS to figure out a way of sidestepping JØP. Initially, their chances seemed promising.

HR applied for an exemption from the Agency for Modernisation (Moderniseringsstyrelsen) on behalf of Joachim Delventhal, but the request was rejected. That left Joachim Delventhal with only one option, in his opinion.

“Then I would rather give up my pension and stop funding my money in JØP’s investments, though I’m fully aware of the fact that I wouldn’t get a pension from CBS at all,” he says and adds:

“But the Agency for Modernisation explicitly refused that too.”

Kirstine Lund Christiansen, Head of Responsible Investments at JØP, is open about JØP’s investments in fossil fuels, weapons – excluding cluster munitions – and tobacco, but explains that last year, JØP’s board of directors approved and put into force a policy on responsibility.

The Danish pensions are managing about 600 billion dollars. It would go a long way if they were invested in sustainable and responsible companies

The policy outlines that JØP should comply with international conventions, treaties and guidelines such as the UN Guiding Principles on Business and Human Rights, and the OECD Guidelines for Multinational Enterprises.

“We have a system in place whereby we quarterly screen our listed portfolio for breach or near breach of international standards for human rights, labor rights, environment and corruption,” says Kirstine Lund Christiansen and continues:

The new policy on responsibility has, according to Kirstine Lund Christiansen, also meant that JØP has excluded seven companies that extract oil sands as part of a project where JØP is reviewing 70 companies in the portfolio that are highly CO2 intensive.

“We assess them to determine if we think they do sufficient to prevent and mitigate their negative impact on the climate. As part of this project, we excluded eight other companies in the spring of 2019, among others were Exxon Mobil, Chevron and Glencore. We are currently assessing more companies within energy production, cement and steel,” she says.

But what about the rest of the more than 280 companies that extract, process and distribute fossil fuels? Does JØP plan to exit its investments in them too?

“JØP excludes the oil companies that we assess aren’t working sufficiently to prevent their negative impact on the climate,” says Kirstine Lund Christiansen, pointing out that following a financial assessment, JØP has not invested in companies where extraction of coal generates more than 50 percent of the revenue.

But what about investments in weapons manufacturers and tobacco companies?

“Regarding weapons producers and tobacco producers, JØP’s board of directors need to have a discussion on excluding these products. A discussion on tobacco will take place this autumn,” says Kirstine Lund Christiansen.

Joachim Delventhal attended a roundtable meeting aimed at finding solutions to how we can keep global temperatures from rising by more than 1.5 Celsius.

At the roundtable meeting, he met a representative from Matter Pension, who explained that according to the Paris Agreement from 2015, funding the green transition required to keep the temperatures from rising will cost about 13 trillion dollars.

“The Danish pensions are managing about 600 billion dollars. It would go a long way if they were invested in sustainable and responsible companies,” says Joachim Delventhal.

Joachim Delventhal has attended an annual general meeting at JØP, where the problems of irresponsible investments have been raised before. However, according to Joachim Delventhal, the response was along the lines of: “Yes, we would like to talk about this.”

Kirstine Lund Christiansen explains that JØP is aware that its members are interested in knowing how JØP works with responsible investments and what it can offer.

“We are aware of the interest in having various investment portfolios with or without specific companies, and we are currently looking into how we can offer this to our members,” she says.

Matter Pension has been digging further into JØP’s portfolio, and reports that having an average sized pension at JØP amounts to adding the annual CO2 emissions from 27 cars to your private CO2 emissions.

In order to find a solution, Joachim Delventhal has researched potential alternatives and worked with HR at CBS. He has also consulted colleagues and even the President of CBS about the matter.

“I have talked to colleagues, who have told me they would also want to switch to sustainable pensions if they had the opportunity. And I believe CBS would make a big difference if it spoke up about this. I even think CBS could generate a lot of branding value and attract staff and students by taking a stand on this issue,” says Joachim Delventhal. 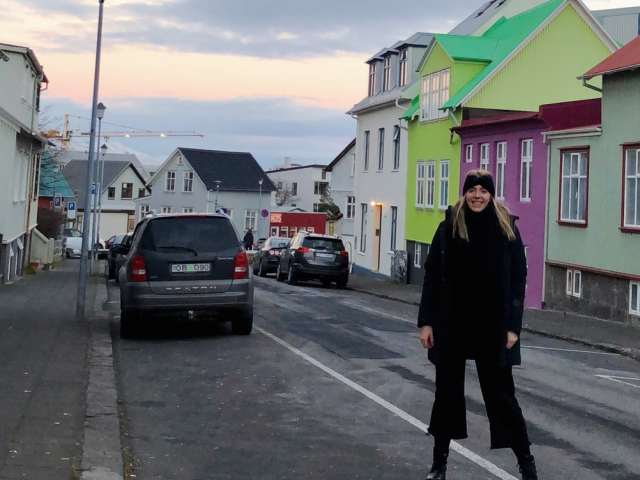 Solo traveling in Iceland to find myself

Researchers: “We waste time and money writing articles no one cares to read”